ISCHIO-FEMORAL IMPINGEMENT MRI: A PAIN IN THE ASS (Updated 2021)

Ischiofemoral Impingement is sometimes missed in Hip MRI because our focus is too narrowly centered on the joint or hamstrings.  When assessing the hip joint it helps to organise the evaluation into compartments like the joint, trochanteric region, hamstrings and surrounding muscles and tendons so that each area is specifically assessed.
Like meniscal root tears,  ischiofemoral impingement is one of those things that you need to look for specifically rather than as part of a general assessment of the hip as we scroll through the scan.

Narrowing and Compression can result in

WHAT AM I ASSESSING:

We need to look for

1. Changes to the Quadratus Femoris

2. Narrowing of the space where Quadratus Femoris is located.

WHERE DO I LOOK FOR IT:

The Quadratus Femoris lies in the space between the ischial tuberosity and the lesser trochanter.

WHERE DO I MEASURE NARROWING AND WHAT AM I MEASURING:

Two areas can be measured for narrowing of the space where the Quadratus Femoris lies, although its often more practical to ” eyeball” the region and decide if it looks narrowed or not.

Additionally a normal size Ischiofemoral space can be seen with Quadratus Femoris changes of impingement as we are scanning the patient at rest and narrowing and compression may only occur when the patient is in another position.

Ischiofemoral space:  Measure the smallest distance between the Medial margin of the lesser trochanter and the lateral margin of ischial tuberosity

Quadratus femoris space : Measure the smallest distance between the Lesser Trochanter and the Hamstrings.

WHAT TO LOOK FOR:

Image Above: Ischiofemoral Impingement MRI The only finding suggesting impingement may be only Quadratus femoris oedema increased PDFS signal (Blue arrow) without a tear.

RELATED POSTS THAT INCREASE YOUR DEPTH OF KNOWLEDGE ON THIS TOPIC:

CONTINUE YOUR LEARNING WITH ONLINE RADIOLOGY COURSES. Click on the image below: 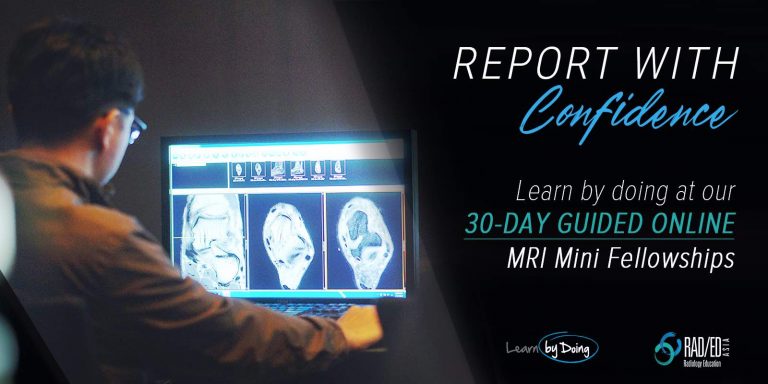