Skip to content
This is the last in a series of articles on the posterior horn and meniscal root and looks at Meniscal Ossicles. Meniscal Ossicles What are they? Areas of ossification within the meniscus. Why Do they Occur? I had been taught and had always thought that Meniscal Ossicles were congenital until reading this article ( Meniscal Ossicle: Posttraumatic Origin and Association with Posterior Meniscal Root Tears. Mohankumar et al AJR 2014; 203:1040-1046). Their study indicates that meniscal ossicles are post traumatic in origin. Here is an abridged version of their findings, images and tables: Where Do they Occur? Most common location was in the meniscal root or posterior horn of the medial meniscus.

Why Do they Occur? Two possible causes 1. Post traumatic metaplasia and heterotopic ossification of a meniscal tear ( either posterior horn or root) 2. Avulsion of bone related to a meniscal root tear. What do they look like? Ossicles are iso intense to bone marrow on all sequences. 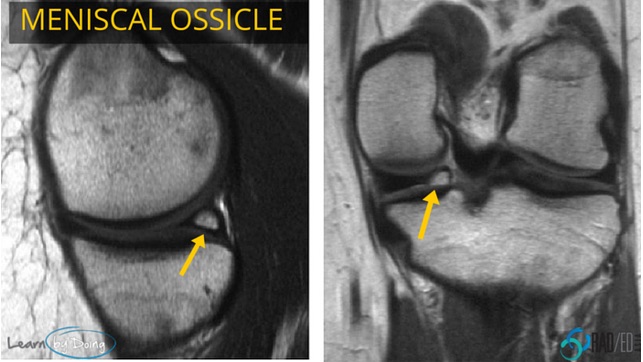 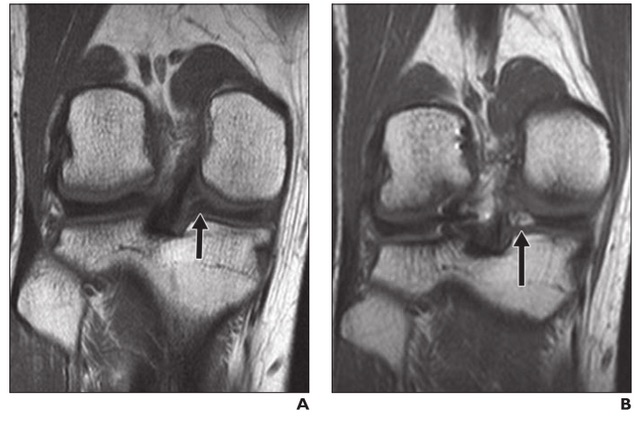 Image Below: Temporal increase in size of ossicle. Initial scan (Image A) shows small ossicle ( arrow) which 18 months later ( Image B) has increased in size. Images from credited article.