How to assess Ankylosing Spondylitis and Spondyloarthropathy Part 1: The Sequences you need to know.

Rheumatologists should be able to assess a MRI Spine for changes of Ankylosing Spondylitis and Spondyloarthropathy.

We have a 3 part series for Rheumatologists (and Radiologists 😀) on how to have a structure to assess a MRI spine and what to look for, starting in Part 1 with the basic sequences you need to know.

In Part 2 by looking at the various signal abnormalities you need to know and what they mean. If you haven’t seen the 2nd part of this series go back to this link CLICK HERE FOR PART 2.

In Part 3 will look at the spinal changes of Ankylosing spondylitis and Spondyloarthropathy.

The talk was delivered for IRACON 21 held by the Indian Rheumatologists Association.

If your Browser is blocking the video, Please Click HERE to view it on our YouTube channel. 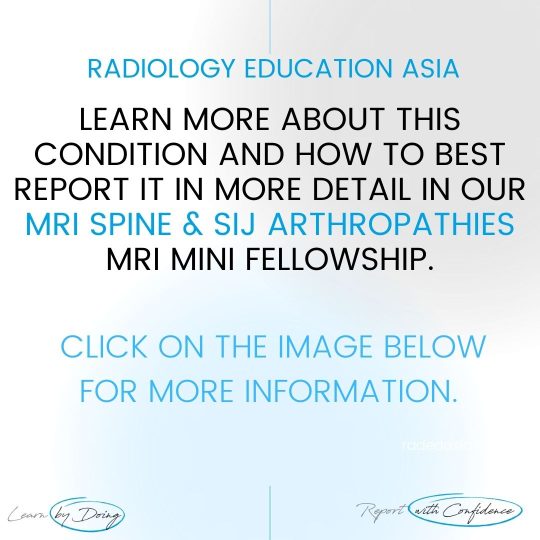 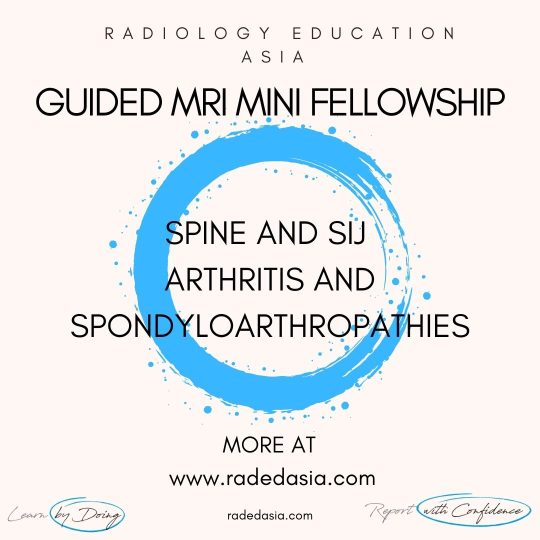 [00:00:00]So I've been asked today to talk about the interpretation of spine MRIs in spondyloarthropathies. And first of all, I'd like to acknowledge the organizing committee for inviting me. It's not common to get a radiologist speaking at rheumatology conferences. So thank you for the invitation. We have called this a rheumatologists edition. So what does that mean? So as a rheumatologist, you are not reporting the scan, but you need to have a good understanding of what's going on in the scan.

So why is that? Because.

The radiologist that you would normally refer to may not have background knowledge or interest in SpA imaging. And also, if you see something. You're able to go down to the radiologist and talk to them about it with a lot of background knowledge. So you can have an informed discussion. Rather than go down there and just sort of point to things and not be sure. So I think as a rheumatologist, it's actually very important for [00:01:00]you to have a general understanding of. How to look at a scan and what to look for. So. In order to do that, you really need to have a structure. And that's the structure we're going to go through in this talk. And we're going to look at how to look at a scan. What to look for and where to look for these things.

So you should have an understanding of the sequences . What are the different types of signal abnormalities that you're likely to see how to interpret them as either active changes or more chronic structural changes? And then have a structure of how to assess the scan and what to assess. So. If we look at sequences, let's start with that. So sequences can get very, very confusing. There's a whole lot of physics with it. We're not going to even touch physics. But what you do need to know, the basic scans that are very commonly done. And these are the T1 ,T2 the T2 [00:02:00]fat saturated or STIR scans. And sometimes post contrast scans. So we're going to go through these different types of scans. So if we start with a T1 weighted scan . Again, we're not going to look at the physics, but I think what you need to know is how do I know when I look at a scan, is it T1 or T2? So the easiest way to know whether it's a T1 way to scan is to look at the CSF. So here's the thecal sac, the thecal sac contents of black. It's a fluid on a T1 weighted sequence is dark. It's a low signal. You'll see also that pelvic fat, so fat is very bright on T1, but this one is own is not enough because T2 weighted scans can also have bright fat. So the simplest way is to look at the CSF and see whether it's dark or not.

Another couple of ways is to look at the corners of the images. And most commonly they will tell you what sort of scan it is. So here you can see, you may not be able to see that, but it says. T1 sagittal. So this is a T1 weighted scan. [00:03:00]And if you really want to, you can look at the TE and TR, these are physics related things, but I don't think it's worth doing that. So either look at the CSF for it being dark, or look up here and find a text that tells you what sort of scan it is.

Okay. The third type of sequence you need to know about is theT2 fat sat (fat saturation). Or a different type of scan, which produces the same result, which is also called a stir sequence. So, what are these. So the reason to do these fat saturated scans is to remove the fat signal. If we look at these two images here, we have a T2 scan and a T2 fat saturated sequence. These are both from the same patient. We have bright fat. We've got some bright signal here, but it looks similar to fat. When we do the fat saturated sequence, you can see that all the fat has gone black. So all the bright signal from fat has been removed. But what's remaining is this really bright Signal, which is fluid similar to CSF. So, if we go [00:05:00]back to this, it's very hard to differentiate fluid from fat. So this is fluid, this is fat, but it's very hard to tell on that. But on here, it's really easy because here's, the fluid is bright. And the apex of that triangle is dark. So that is fat. So the reason to do T2 fat saturated sequence is to bring out fluid signal. And that's important when you have oedema, particularly bone marrow oedema, often there is bright. Fat signal also. So it gets rid of that and anything that's bright in bone after your fat saturate, it will be oedema.

Similar Reason to use a STIR sequence. This is a very common sequence to be performed. So most often you will see a STIR sequence rather than T2 fat set. Hear is the T2. Here's a STIR sequence, same patient. This is the pelvic fat. And you can see that signal is completely gone. It's it's become dark. So it's fat saturated. CSF is a bit brighter than it is on T2. And you can see the disc [00:06:00]spaces, also the fluid in the disc spaces as much brighter than it is on a T2. So it brings out that fluid signal. So either a T2 fat saturated sequence, or a stir sequence to remove the fat, these are really essential scans.

They have to be done. And when you refer patients. The radiology department has to do this. They should, but if they don't do it, you should insist on it.

Okay. So the fourth one is a post contrast scan, not these scans. Not common. You don't really need to give contrast for routine imaging in SpA. But if you happen to give contrast, we do a couple of things. One, this is the normal T1 weighted sequence that we've talked about. So fat is bright. CSF is low signal. We can also fat saturate these scans. And the reason we do that is that once you give contrast, if something's enhancing, it becomes very bright. And that bright signal can look [00:07:00]very similar to fat signal. So what you need to do is remove the fat signal. So here's, here's a fat epidural fat. The signal is removed and what remains this bright signal here is the enhancement due to the contrast, and this is a vessel, so we can see the venous plexus here that's enhancing, but you would have trouble noticing that if you didn't fat saturate.,

And an example of that is this. So this is the same patient. We've got a fat saturated. T one way to scan CSF is dark. This is a non-fat saturated scan through the same level, and you can see the enhancement here in the epidural space. And it's really obvious. That's it cause it's dark everywhere else. This stands up. But if you don't fat saturated, this is the enhancement. But there's also a whole lot of fat Sigler on, so it's hard to know, is this fat or not? So it just makes your life a lot easier.

RELATED POSTS THAT INCREASE YOUR DEPTH OF KNOWLEDGE ON THIS TOPIC: CLICK ON THE IMAGES BELOW 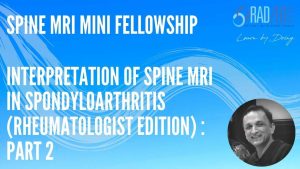